“I Always Saw Them As Human”

On the 50th Anniversary of the My Lai Massacre in March 1968 San Diego Veterans for Peace sponsored a talk by Dennis Stout as part of their programing for My Lai Memorial Exhibit.

Dennis shares his experience as an infantryman with the infamous U.S. Army Tiger Force as they swept through villages in Quang Ngai Province in 1967, “killing anything that moved”, burning houses and poisoning wells.

Dennis was one the few American soldiers who reported his fellow infantrymen of war crimes. The charges he lodged were documented with signed confessions, but they were eventually dismissed. 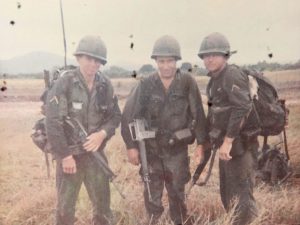